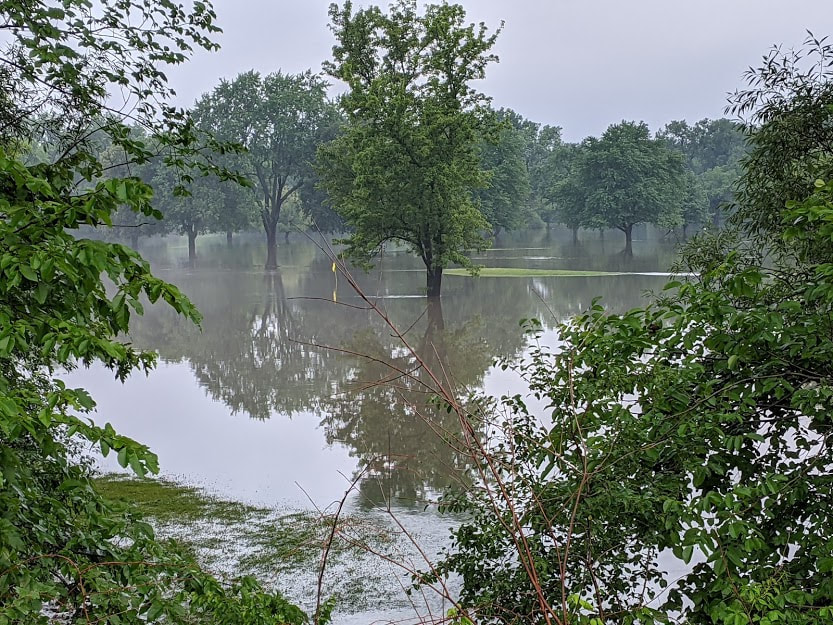 UPDATE July 8, 2021
Save Hines Park members have sent us photos and videos from last month's flood in Hines Park. We need every square foot of  floodplain and uplands in Hines Park to do its job to reduce the impact of floods on our streets and in our basements. Further loss of this precious resource through sales and development threaten us all. This photo is of the submerged Warren Valley Golf Course that Wayne County attempted to sell to a developer to build homes in 2016. See all our photos and videos here.

The sales agreement for Wilcox Mill by Tony Rocco, a local artist, was withdrawn because of financial difficulties. Several Commissioner voted against the sale, Commissioners, Glenn Anderson, David Knezek, Raymond Basham and Tim Killeen. Commissioner Basham felt the sale of the Mill should be rebid. Commissioners Anderson, Knezak and Killeen felt parkland and the Mills should not be sold to private developers.

Ironically, at the meeting the County stated that they did not have the money to restore the mills and lease them out and they were not being used by the Parks Department. At the same meeting they asked the Commissioners to approve giving the Detroit Riverfront Conservancy $750,000 to build a section of the Riverwalk.

They also approved a contract extension to Hi-Falutin’ Music, LLC (of Detroit) for artistic direction for the “Motown on the River” and “Jazz on the River" events at Elizabeth Park. This contract amendment increases the total contract from $450,000 to $750,000; the terms of the amendment is from May 24, 2021 through May 23, 2023; however there will not be concerts in 2021. No one asked any questions about the large increase in the contract.

During the public Input, Nancy Darga asked the Commissioners to include a deed restriction to the sale that does not allow for the parkland to be split and sold off to a separate development.

The voters of Wayne County overwhelmingly voted to support a park millage every election since 1996. Since then, more than $245 million has been collected to preserve, maintain and improve the parks.  Voters did not support the millage to see our parkland sold off for private development.  Currently the park millage generates around $10 million per year.

Save Hines Park, a group of Wayne County residents, was organized in 2017 to stop the sale of the Warren Valley Golf Course and surrounding parklands in Hines Park to a housing developer.  We then organized an effort to ask the county to reconsider the sales of Wilcox and Newburgh Mills and instead lease them in a public/private partnership. Commissioners Alisha Bell, Jewel Ware, Martha Scott, Ilona Varga, Irma Clark, Monique McCormick, Terry Marecki, Melissa Daub, Al Haidous, Sam Baydoun, Joseph Palamara and Raymond Basham voted to sell both mills on Dec. 5, 2019. Tim Killeen, Diane Webb and Glenn Anderson voted to protect our parkland. Save Hines Park succeeded in stopping the proposed sale of 11 acres of Hines Park for residential development (at least for now).